Even before NEA President Lily Eskelsen García gaveled open the 2020 National Education Association Representative Assembly (NEA RA) in a virtual space, New Jersey showed up on the devices of every delegate in the nation as NJEA’s commercial  about Jersey City Education Association member Martha Garcia showing how she has been teaching art to students from home in the midst of the pandemic. 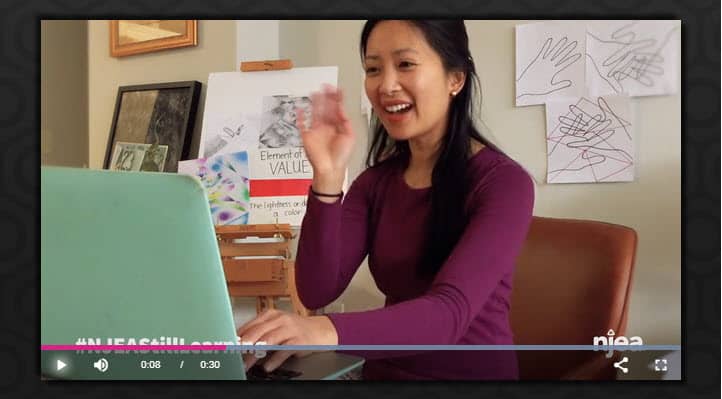 “NEA virtual convention with NJEA’s commercial!” NJEA President Marie Blistan enthusiastically posted to her Facebook page. “JERSEY STRONG and #RedforED. NJEA, I’m so very proud of all that you do, and all that we do as a union!”

New Jersey again received a shout-out when it was listed by Jefferey Byrd, chair of the NEA Credentials Committee, among the states to achieve minority representation goals.

According the U.S. census, 45.4% New Jersey residents identify themselves as a person of color. In recent years, NJEA members have made a conscious effort to send a delegation to the RA that looks like New Jersey. As a result, NJEA has in the last several years consistently met its 3.1(g) goal. This year that effort was energized by the NJEA Members of Color initiative, through which NJEA staff and members explained the path to becoming a delegate to new and more diverse audiences.

NJEA seeks to ensure that the participation of members of color in the association is much more than achieving a percentage by infusing the goals of racial, social, economic and education justice throughout the association. As one part of that effort, all members are encouraged to join NJEA’s R.E.A.L. movement. R.E.A.L. stands for racial equity, racial affirmation, and racial literacy. Visit www.njea.org/realmovement to learn more. Members of color are further encouraged to join the Members of Color social media page by searching “NJEA MOC” on Facebook.

Did Lily Eskelsen-García use a turn of phrase and cover a topic that you’d like to check out a second time? Were you moved by the stories and a call-to-action from Stacy Abrams?

Good news! NEA has posted videos of their speeches.

You can watch Abrams at https://youtu.be/fNu3PMVgDd4.

NEA Secretary-Treasurer Princess Moss presented the NEA Proposed Strategic Plan and Budget as the last item of business for the video portion of Day One of the NEA RA. The budget can be viewed at https://ra.nea.org/delegate-resources.

The delegation then moved to a conference call to facilitate debate and questions about the budget among the over 7,000 delegates.

Among the dozens of callers was NJEA member Patricia Jones, an administrative assistant in the Robbinsville School District, who is the legislative chair and building rep for the Robbinsville Education Association. Jones also serves on the NJEA Elections Committee.

Jones expressed her concern for funding to support educational support professionals (ESPs) who may be furloughed or laid off because schools are required to again close their buildings because of COVID-19.

“Is there any funding or resources through this budget to help them,” Jones asked.

Princess Moss explained that there is $5.5 million in the budget available to all members and that they may work through their local or state association to apply for support.

Later in the call, Newark Teachers Association Vice President Yanique Leveque called in to note that the NEA budget, because of COVID-19, reflects the same level of expenditures as last year. Leveque asked why dues were increasing if the budget was the same. NEA dues for full-time certificated staff are increasing $4 per year. For ESP, the dues are increasing $2 per year.

Eskelsen-García explained that dues are calculated through a formula found the bylaws. Bylaws can only be amended by delegates to the NEA RA. Amendments are proposed at one NEA RA and considered in the subsequent year’s NEA RA.

“How were those organizations vetted for us to be supporting them?” Haines asked.

Eskelsen-García called in NEA Chief Financial Officer Michael Mcpherson to explain that not only does NEA look at the financial stability of any organizations with which it partners, but also examines whether the potential partners are pro-public education. He called on NEA members to let NEA know if they feel that a particular partner may need further examination.

Eskelsen-García explained that when NEA looks at its goals, if it finds a financially stable partner that is in line with NEA principles, rather than duplicate efforts, they join their efforts. She reiterated, however, that the vetting process is thorough and that it is not easy to become an NEA partner.

“We’re pretty picky about who we choose,” Eskelsen-García said.

Kathy Rodgers, a teacher and member of the Paterson Education Association, asked if the NEA budget includes funding for racial justice reform, particularly with African Americans as the group on which injustice is having the greatest impact.

Eskelsen-García said that throughout NEA’s budget, $26,652,793 goes toward racial justice work. She noted that NEA Secretary-Treasurer Princess Moss would be posting a report identifying those expenditures in the budget. Those budget expenditures are now posted on the NEA RA website and can be found here or by visiting https://ra.nea.org/delegate-resources/ and scrolling down to “Racial and Social Justice Work throughout the 2020-2021 Strategic Plan & Budget.

On Day 2 of the NEA RA, New Jersey again took center stage at the NEA RA, with NJEA members who are running for office.

James Frazier is NJEA’s endorsed candidate for NEA Secretary-Treasurer. In his remarks he spoke firmly about his vision for NEA, saying ““I will ensure that the tone at the top of our organization is to maintain our fiscal stability as well as doubling down on our strategic priorities,” Frazier said. “We must continue to develop member-driven organizing campaigns and support states to combat injustices that have been fully realized and felt across our education community.””

You can watch his speech here.

Danita White-Morris of the Bridgeton Education Association is running for her first term as an at-large ESP member of the NEA Board of Directors. “We need Washington to know that we are sick and tired of being sick and tired, and that every child, no matter their race, religion or economic status, they are entitled to a quality education,” White-Morris, said.

You can watch her speech here.

Ashanti Rankin of the Millville Education Association, is an incumbent ESP-at-large member of the NEA Board of Directors, seeing re-election. “This is our time to parachute in to be more assertive, more aggressive and more strategic,” Rankin said. “To make sure our elected officials know that our students are first in the budget or their office won’t last.

You can watch his speech here.

New Jersey delegates also endorsed North Carolina’s Margaret Powell, who is running for re-election to the board. Having worked in urban and rural districts, Powell said, “Our students needs have yet to be met and that workers’ rights are still not a priority for policymakers,” Powell said. “I am committed, connected, and passionate about the work that is necessary to take public education to the next level.”

You can watch her speech here.

Biographies and videos submitted by all candidates can be views at ra.nea.org/delegate-resources/. 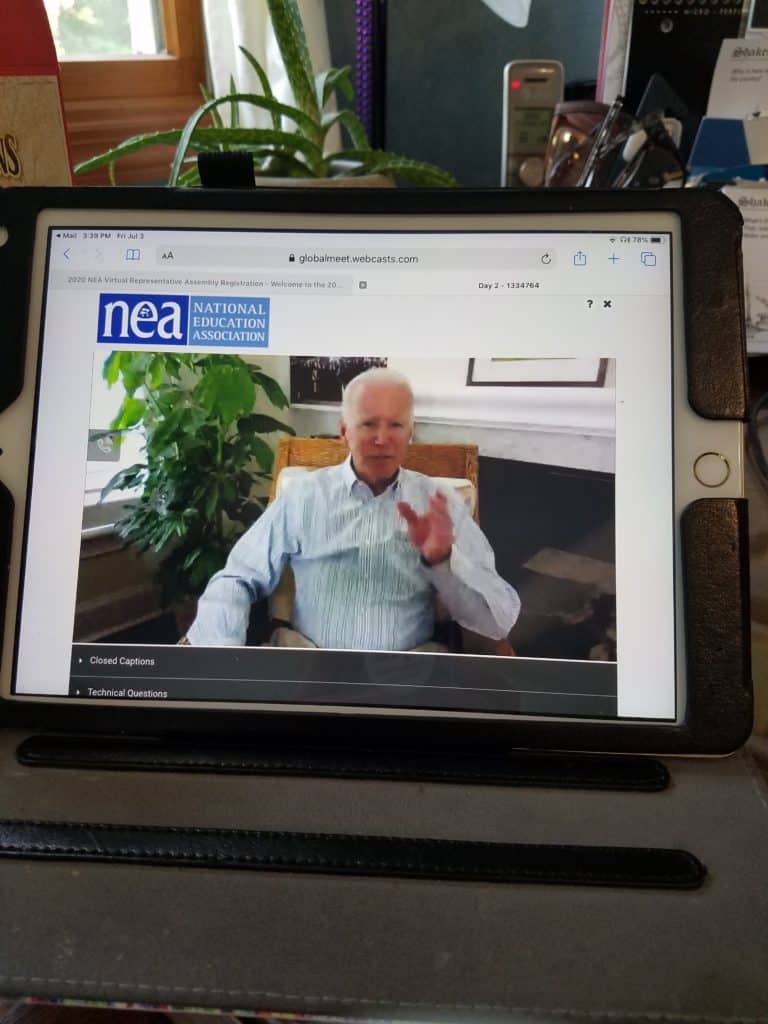 “With so much at stake in this election for our students, our families, and our democracy, educators are engaged in this election like never before,” said Eskelsen García. “As we saw again today, Joe Biden is a tireless advocate for our students and public schools. As President of the United States, Joe Biden will fire Betsy DeVos on his first day in office, replacing her with an education secretary who comes from a public school classroom and believes that educators should be essential partners when crafting education policy. He will work to dismantle systemic racism that prevents too many Native, Black, and Hispanic Americans from reaching their full potential, while building an economy that works for all Americans. Biden will listen to the doctors and scientists on how to mount an effective crisis response to the COVID crisis, while partnering with educators so our students have the resources they need once school buildings reopen. And he understands that students will need more support than ever, which is why he has called for Congress to act by providing funding for America’s public schools so 1.9 million educators aren’t laid off.”

In March, NEA recommended Joe Biden in the Democratic Primary.

“What happens to our children is going to determine exactly what happens to this nation,” said Vice President Joe Biden. “These aren’t someone else’s children. They are our children. They are the kite strings that lift our national ambitions aloft. We need to ensure that you and your students get treated with the dignity that you deserve. When we win this election, you’ll get the support you need and the respect you deserve.”

On the role of educators in our communities, Biden said, “You are the most important profession in the United States. You are the ones that give these kids wings. You give them confidence. You let them believe in themselves. You equip them. And I promise you, you will never find in American history a President who is more teacher centric and more supportive of teachers than me,” concluded Biden. “Jill has a great expression, ‘Joe, any country that out educates us is going to out compete us.’ It’s time we raise the game and make you the managers,” he added.

In addressing the systemic and institutional racism in our country, Biden said,“[If] ever there was a time for big change, it’s now. We have to make this at least an era of action to reverse systemic racism with long overdue concrete change — we can do it… I think the country is ready.”

In addressing how we can reopen schools safely, Biden said, “I’d mobilize the federal government to take special steps, one, provide for schools to reopen. Make sure states and districts have the funding to keep educators on the job in the midst of this crisis. Boost federal funding to cover the cost of PPE, extra cleaning, new technologies, redesign classrooms, all the things schools are going to need to do to be able to open and open with normality. Scale research on how COVID affects children to help understand how the virus affects children and create evidence-based guidance. Build a safer school best practice clearinghouse… I’m going to work with educators, child care providers, unions, communities and families on how to reopen safely.” He added, “We also have a tremendous opportunity to go back, but not just go back — build back better.  We can’t afford to not open our eyes, ears, hearts. It’s on each of us to do our part to heal divisions in this country.”

And on the educator job losses, Biden said, “Trump and the Senate Republicans refuse to do the job. This is about people. I’m making sure educators’ salaries don’t get cut and educators don’t get fired. We could have kept every educator employed but instead we lost more than 900,000 state and local education jobs since the pandemic started due to budget cuts. This is absolutely unacceptable.”

Joe and Dr. Jill Biden, herself an educator and longtime NEA member, have consistently reached out to educators across the country, building broad support among NEA members. He attended all three of NEA’s presidential forums, in Iowa, Pennsylvania, and Texas, and recorded a video interview with NEA President Lily Eskelsen García to make his case to educators. This outreach to educators has continued since March, as VP and Dr. Biden have listened to educators on the front lines of the COVID crisis about the heroic work they have done to support their students and communities, and what is needed to safely reopen school buildings this fall.

The video of Biden’s address can be found here.